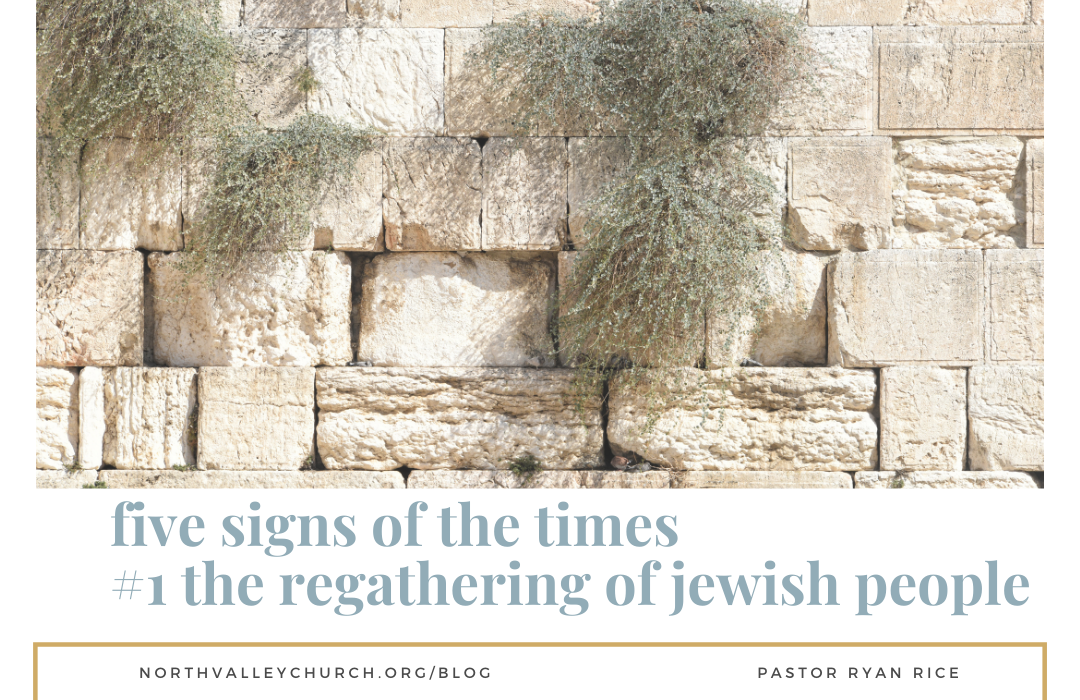 For behold, days are coming, declares the Lord, when I will restore the fortunes of my people, Israel and Judah, says the Lord, and I will bring them back to the land that I gave to their fathers, and they shall take possession of it.”

The Regathering of Jews back into their homeland is perhaps the greatest sign of all. Did you know that the Jewish people have always been at the center of God’s heart since the very beginning? Take for example the Abrahamic Covenant in Genesis 12:1-3, God promised to make for Abraham a great nation with their own land! That land was Israel. The promised land! There’s always been a tension around who’s land that is. Even today it’s a geographical epicenter of religious and political battles. We often wonder why? It’s because there is a battle behind the scenes. Forces of good and evil at war over this promise God made to the Jewish People. And God has and will deliver on his promises.

Israel is as well the place in which one day Jesus the King of King will rule and reign on earth for a literal 1,000 years in the Millennial Kingdom. Israel has been and still is at the center of God’s plan and purpose for the world. There has always been a promise and a plan to preserve the Jewish people. Pharaoh couldn’t keep them, Hitler couldn’t exterminate them, on and on throughout the pages of history these people have a distinct plan in God’s purpose for our world.

Note what one scholar noted….

The Jewish people are the only exiled people to remain a distinct people despite being exiled. Not just once but multiple times and the most recent exile was to more than 70 countries for more than 20 centuries. Today, for the first time since AD 135 there are more Jews in Israel than any other place on earth.

The Prophet Ezekiel predicted some 2,500 years ago that Israel would return and be restored to their homeland as one unified country.  As Dr. Price, Archeologist, and Bible Professor stated….

The modern return of the Jewish People to the Land of Israel has been called the “Miracle on the Mediterranean.” Such a return by a people group that had been scattered among the nations is unprecedented in history. Indeed, the Jewish People are the only exiled people to remain a distinct people despite being dispersed to more than 70 different countries for more than 20 centuries. The mighty empires of Egypt, Assyria, Babylon, Persia, Greece, and Rome all ravaged their land, took their people captive, and scattered them throughout the earth. Even after this, they suffered persecution, pogrom, and Holocaust in the lands to which they were exiled. Yet, all of these ancient kingdoms have turned to dust and their former glories remain only as museum relics, and many of the nations that opposed the Jews have suffered an economic, political, or religious decline. But the Jewish people whom they enslaved and tried to eradicate live free and have again become a strong nation!

Despite Hitler’s Holocaust of some six million European Jews between 1941—1945, God’s kept his promise to make the Jewish people into a great nation! On May 14, 1948, the United Nations declared Israel to be their own nation again! Some 650,000 Jews returned to rebuild their country, their faith, and their families. While millions of Jews were scattered all throughout the world, today they are gathering back to their ancestral land of Israel according to God’s promises. According to the Jewish virtual library “On the eve of Rosh Hashana 2020, Israel’s population stood at 9,246,000.  This is a more than 10-fold increase compared to when Israel was founded in 1948.”

It’s a miracle! God’s promises are being fulfilled! The regathering of Israel is setting the stage for the second coming of Christ and serve as the super sign of our times. It’s mentioned in scripture consistently and continually. (Zechariah 10:6-10, Ezekiel 37, Ezekiel 34:11-24, Jeremiah 30:1-5)

In light of looking at God’s promise for the Jewish people. How do you think we ought to pray or relate to Jews in the world?  Take a minute and pray for your Jewish friends or family members. Pray for their salvation in Jesus and pray for those in Israel as well, their protection.