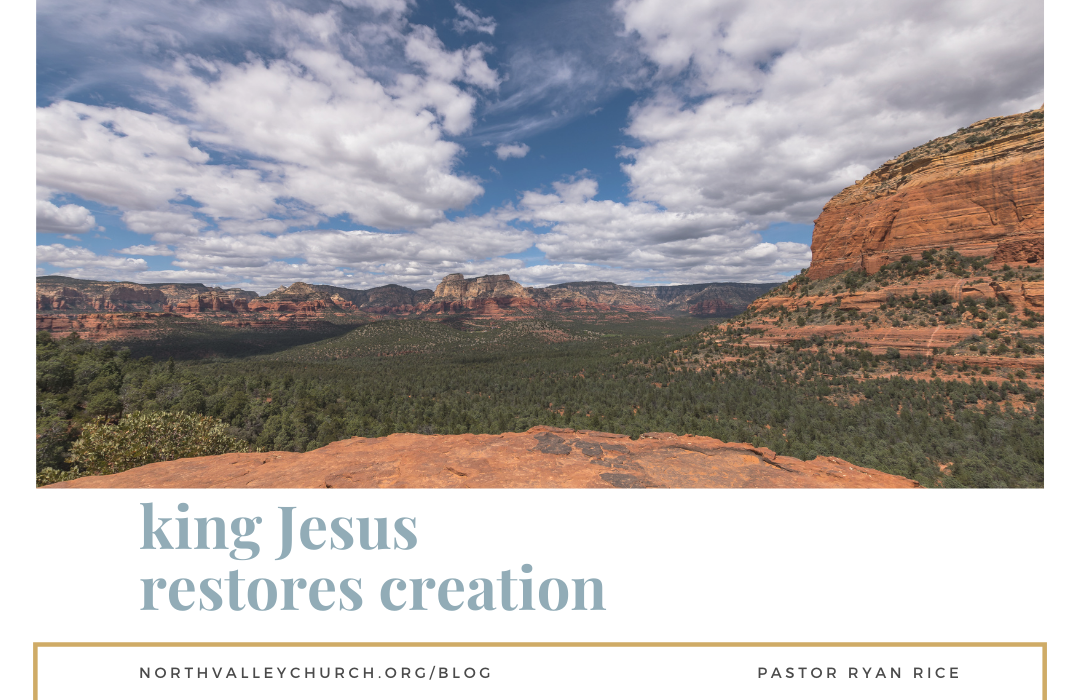 Even the wilderness and desert will be glad in those days. The wasteland will rejoice and blossom with spring…

When we watch the news in today’s times, we see issues of global warming, climate change, and air pollution. There is a natural concern that comes when one thinks about how the world has limited resources. Especially with a growing population on our planet with some 7.6 billion people and growing. Living in Arizona it’s a continual concern when it comes to water. With the city as big as Phoenix and water in such short supply there is good reason to be concerned about natural resources.

But in the kingdom to come there will be no need to worry, about water or anything else on our planet. King Jesus promised to restore all things. The question comes as to what are these all things. There are three things in particular that I would like to point out, to help us better understand how our world will be restored.

These late-comers that are survived the tribulation, will still have sin, marry, and give birth to children that have sinful nature. They will still struggle with sin and sickness but will still be blessed with many benefits that are not currently present in this world in this day and age. The Millennial Kingdom will be so different.

Note one scholar’s idea about how human life itself will be different.

Before the flood of Noah’s day, people lived to incredible ages. According to Genesis 5:27, Methuselah lived to be 969 years old. Some scientists believe the climate of the earth was so different, the genetic pool was so young, and the grace of God was so fresh that people lived for many centuries. Many people believe the flood changed the nature of the earth. Before the flood, perhaps a vapor canopy protected us from the ultraviolet rays of the Sun and enhanced longevity. The climate of the world was the healthiest in history. …..But some experts believe the vapor canopy collapsed during the flood from that point onward, the human life span was a fraction of what it was prior to the flood. [1]

People will live longer than ever before and they will also know God like never before. The Prophet Isaiah said... “No longer will babies die when only a few days old. No longer will adults die before they have lived a full life. No longer will people be considered old at one hundred! Only the cursed will die that young!” (65:20) It will be a strange thing for believers to die young. People will live for an incredibly long time.

It will be a mixture of immortal and mortal human beings. Angels will be present as well, The Kingdom of God and the Kingdom of Heaven will seem closer than ever.  Something like no eye has ever seen. In this new world, there will be animal kingdoms and the kingdom of men living in harmony together, alongside them will be angelic creatures and others working and worshiping our King Jesus.

Even the wilderness and desert will be glad in those days. The wasteland will rejoice and blossom with spring.. 2 Yes, there will be an abundance of flowers and singing and joy!  The deserts will become as green as the mountains of Lebanon, as lovely as Mount Carmel or the plain of Sharon. There the Lord will display his glory, the splendor of our God. (Isaiah 35:1–2, NLT)

Just consider what that will be like? The brown deserts will now be full of green mountains as well. Where there was no rain or rivers there will be showers and streams. This new world will be like that in the Garden of Eden or even better. Let’s see what else God will do to restore this world.

Johan Sebastian Bach sometimes slept more than he should have. His children had a unique way of waking him up. They would go to the piano and begin to play a composition. When they would get to the last note, they would stop. They wouldn’t play the last note. It worked like a charm, and it would wake him up. You get up from his sleep, go to the piano, and play the final chord. He couldn’t stand to leave it hanging there incomplete – unfinished.

In the same way today we are waiting for the last note to be played in God’s song of victory. He will finish what he started. He will fulfill all his promises. He will redeem and restore all that has been lost. For he is the great promise maker and keeper. He is the alpha and the omega. He is God.

God cares about the world in all that is in it. For when he made it, he said it was good. As well when He renews it and remakes it, there are many of the same features of the world we know today. If God’s care for His creation, shouldn’t we follow in God’s footsteps and care as well? What can you do to better care for creation?