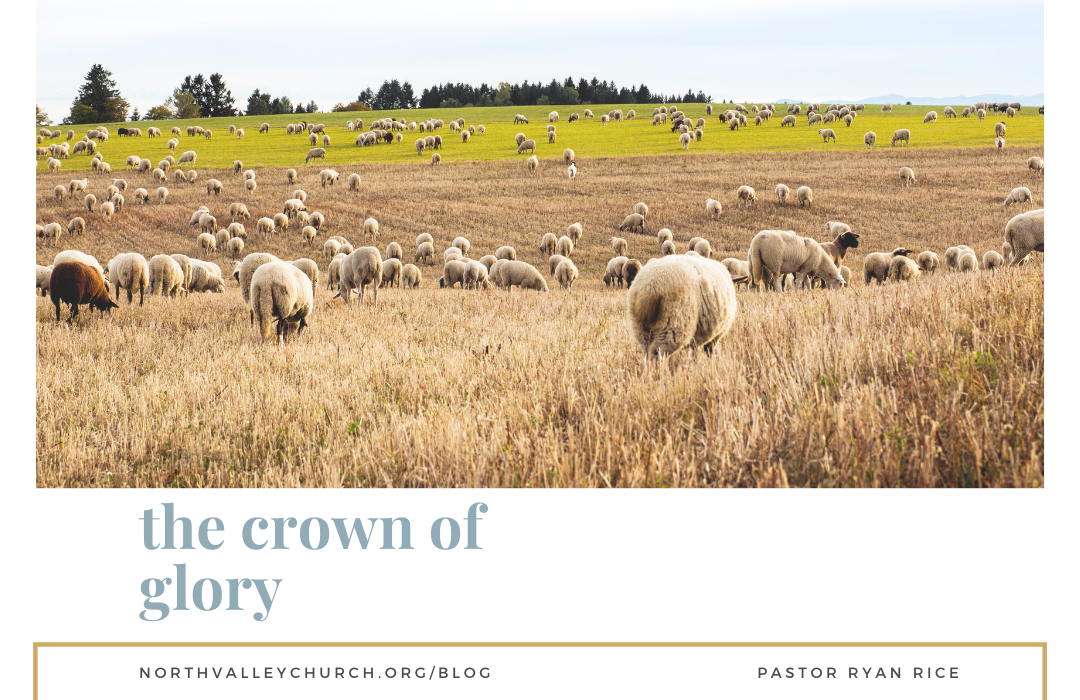 Shepherd the flock of God that is among you, exercising oversight, not under compulsion, but willingly, as God would have you; not for shameful gain, but eagerly; not domineering over those in your charge, but being examples to the flock And when the chief Shepherd appears, you will receive the unfading crown of glory

Here in this text, we find perhaps one of the most helpful passages for pastoral leadership. Peter illustrates the relationship between the leadership and the church, is like that of a shepherd and his flock.  Here we find not only practical insights to the pastoral ministry but prophetic promise as well.  We are told not only to do a good job but we are told that there is an award that awaits these leaders.

I don’t believe that this award is limited to church staff or elders.  Rather, God’s Word says it is for those that “Shepherd the flock of God.” As parents of children, you have a flock to shepherd. Some of you have small flocks, others have bigger flocks. Every family is a flock! Parents are to serve as the moral and spiritual leaders of the children. As a Sunday school teacher, your kids in the class are your flock. They look to you for guidance. As a Community Group Leader, your small group could be understood as your flock. As a Christian employer or overseer, your employees or team is in a sense your flock. Any position that you have been placed in that is over people needs some level of Shepherding for those under your leadership.

As we consider this passage. It’s important to consider at least two things. First, just how important this role really is. Imagine if Billy Graham would have never got his start because a Sunday school teacher never showed up, or the Preacher quit when things got tough. Or what if Mother Teresa, never saw a vision of godliness in the life of her mother or the church leaders? Without faithful Shepherds, the next generation can easily be lost. Secondly, consider the exhortation on how to exercise oversight:

HOW TO SHEPHERD | THREE TIPS

First, “Not under compulsion, but willingly” Leading others with a Shepherd's heart is something that needs to be willing. When someone is forced into a position of leadership the Shepherd and Sheep get lost.

Second, “Not for shameful gain, but eagerly” If the motive for ministry leaders is money, power, or position, it’s going to be a disappointment. Pastors could make far more money in the business world and need to be in ministry not to make a bunch of money but make a bunch of disciples! Ministry leaders need to have the right motives as to why they are serving and be eager to serve in the ministry.

Third, “Not domineering over those in your charge, but being examples to the flock.” Ministry leaders can’t be domineering over others. Rather serving as examples by lovingly leading others, providing guiding, gently correcting, and redirecting as needed.

In ministry, the workers often feel undervalued. They pour themselves out and there is no big awards ceremony! No big bonus from the boss. No pot of gold at the end of the rainbow. It’s a long hard journey that isn’t for the faint of heart.

This reminds me of a story that I heard of an old missionary couple who had been working in Africa for years, and they were returning to New York City to retire. They had no pension; their health was broken; they were defeated, discouraged, and afraid. They discovered they were booked on the same ship as President Teddy Roosevelt, who was returning from one of his big-game hunting expeditions.

No one paid much attention to them. They watched the fanfare that accompanied the President’s entourage, with passengers trying to catch a glimpse of the great man.

As the ship moved across the ocean, the old missionary said to his wife, "Something is wrong. Why should we have given our lives in faithful service for God in Africa all these many years and have no one care a thing about us? Here this man comes back from a hunting trip and everybody makes much over him, but nobody gives two hoots about us."

"Dear, you shouldn’t feel that way," his wife said.

"I can’t help it; it doesn’t seem right." The husband replied.

When the ship docked in New York, a band was waiting to greet the President. The mayor and other dignitaries were there. The papers were full of the President’s arrival, but no one noticed this missionary couple. They slipped off the ship and found a cheap flat on the Eastside, hoping the next day to see what they could do to make a living in the city.

That night, the man’s spirit broke. He said to his wife, "I can’t take this; God is not treating us fairly."

His wife replied, "Why don’t you go into the bedroom and tell that to the LORD?"

A short time later he came out from the bedroom, but now his face was completely different. His wife asked, "Dear, what happened?"

"The Lord settled it with me," he said. "I told him how bitter I was that the President should receive this tremendous homecoming when no one met us as we returned home. And when I finished, it seemed as though the LORD put his hand on my shoulder and simply said, ‘But you’re not home yet!’" (From Talking To My Father, by Ray Stedman)

Are you ok? Did you need God’s encouragement today? Ask the LORD to encourage you and energize you to be faithful to the end. Keep shepherding your flock and wait for the LORD’s reward.